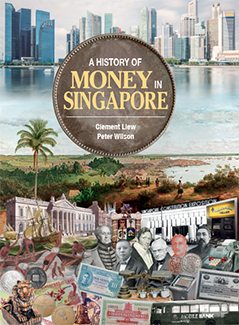 This is the story of the money used from pre-colonial times to the present day on the island we know as Singapore.

This signature book describes the multiplicity of currencies that have been used in and around the island over the centuries, and how these culminate in the Singapore dollar today. The authors trace the impact, sometimes dramatic, of political and economic events and technological path, from the days when, in the first few decades of the colonial settlement, local merchants resisted currency reforms imposed on the island by the East India Company. Greater monetary autonomy was achieved in the second half of the 19th century when Singapore became a Crown colony in its own right. The drive towards self-representation culminated in full internal self-government in 1959, independence from British colonial rule in 1963 as part of the Federation of Malaysia, and the status of a sovereign nation in 1965. The introduction of Singapore’s own currency in 1967 was a national milestone. In 1971, Singapore established the Monetary Authority of Singapore with the sovereign power to undertake monetary policy as it deemed most appropriate.

Money has evolved from coins minted from precious metals to those struck from baser metals, to notes issued first by commercial banks and later by governments. The journey from commodity-based money to a purely flat money has unfolded in parallel. The use of money in its electronic and more ‘weightless’ forms has also become increasingly common. The powerful effects this trend will have on the nature of money and banking are still unfolding. All these issues, and more, are examined in this book, published to mark the 50th anniversary of the founding of Singapore’s central bank, the Monetary Authority of Singapore (MAS), in January 1971.