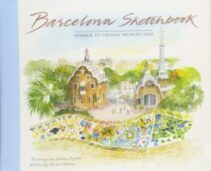 The perfect introduction to the city’s architectural heritage, Barcelona Sketchbook gives visitors and residents insight into a wealth of sights, both grand and intimate in scale. Many facets of the Catalonia capital and surroundings are recorded here, as Graham Byfield strolls with his sketchpad through the Ramblas, the glories of Antoni Gaudí, the great ceremonial buildings, and cafés and parks full of character. On the way, with a few pencil strokes and splashes of watercolour, he captures scenes of daily life, as well as a plethora of architectural wonders dating from the Middle Ages to the present day.

Founded as a Roman city, Barcelona became the capital of the County of Barcelona in the Middle Ages. After merging with the Kingdom of Aragon, it continued to be an important city as an economic and administrative centre and the capital of the Principality of Catalonia. Besieged several times during its history, Barcelona has a rich cultural heritage and is today a major tourist destination being one of the world’s most visited cities. Particularly renowned are the architectural works of Antoni Gaudí and Lluís Domènech i Montaner, which have been designated UNESCO World Heritage
Sites. The city is also an important port, has hosted two International Exhibitions and is known for its successful Summer Olympics in 1992.

Accompanying the paintings and sketches are observations and notes handwritten by the artist, as well as a learned and informative introduction to Barcelona and its various areas by heritage expert Marcus Binney.

Graham Byfield
Graham Byfield is an English watercolour artist who has published several books, postcards and prints of paintings featuring cities and other places of interest around the world. The early years took him to work as a creative director in Canada, Australia, London and Singapore at different international advertising agencies. He used this experience as an opportunity to study vernacular architecture, savour the landscape and explore local cultures through his paintings. Now a full-time artist, he has his own gallery in Menorca whilst he is there in the summer. He travels extensively to
research his books which include nine Sketchbooks of Singapore, Bali, Thai Silk, London, Amsterdam, the Bahamas, Oxford, Cambridge and, now, Barcelona.

Marcus Binney
Marcus Binney is a historian and writer with a passion for European architecture especially the decades around 1900 — Barcelona’s most creative age. He has written for many years, both for Country Life magazine and The Times. He is the founder and chairman of SAVE Europe’s Heritage. His books include London and Cambridge Sketchbooks (with Graham Byfield), Great Houses of Europe, In Search of the Perfect House, Great Stations of Europe (with Axel Foehl), Airport Builders, Town Houses and The Women who lived for Danger.