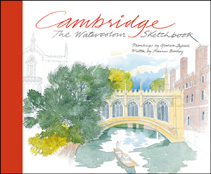 The perfect introduction to the city’s architectural heritage, Cambridge — The Watercolour Sketchbook gives visitors and residents insight into a wealth of sights, both grand and intimate in scale. Many facets of the univerity town and surrounds are recorded here, as Graham Byfield strolls with his sketchpad through college gateways, courts and gardens, along broad streets and narrow alleyways, into great ceremonial buildings and medieval pubs full of character. On the way, with a few pencil strokes and splashes of watercolour, he captures scenes of student and civic life, as well as a plethora of architectural wonders dating from the 9th century to the present day.

All of England’s architectural styles are well represented in Cambridge, and a sunny day spent wandering around the city can be intoxicating. Indeed, as writer Marcus Binney says: “If one city had to stand for all that is fine, inventive, lovely and sensitive in English architecture, it is Cambridge.” The university town claims 1,000 years of architectural glories beginning with the visibly Anglo-Saxon tower of St Bene’t, continuing with the massive Norman arches of Holy Sepulchre, through Renaissance and Gothic styles, to English Baroque, Victorian and more. It is also the place to see post-war architecture at its most bold and inventive and its most controversial.

Accompanying the paintings and sketches are observations and notes handwritten by the artist, as well as a learned and infomative introduction to Cambridge by heritage expert Marcus Binney. An Appendix with more detailed information on the various college buildings completes the book.

Graham Byfield
An artist and art director, Graham Byfield has published several books and postcards of paintings featuring several cities around the world. His early career took him abroad, to the Far East in particular, where he seized the opportunity to study local cultures and styles of architecture. With a gallery in Menorca, Spain, previous books include Singapore Sketchbook, Jim Thompson: The Thai Silk Sketchbook and, most recently, Bahamas Sketchbook.

Marcus Binney
An eminent writer, journalist and conservationist, Marcus Binney was the founder, and is now President of Save Britain’s Heritage. He also holds the chairmanship to Save Europe’s Heritage. Former editor of Country Life and Landscape and environmental correspondent for Harper’s Bazaar, he is now architectural correspondent of The Times. He has also written several books. Binney was awarded the OBE in 1983 and the London Conservation Medal in 1985.