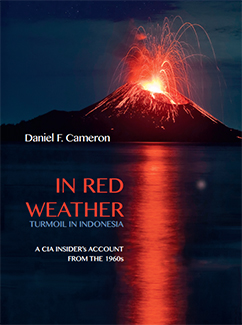 In Red Weather is the true story of one of the major intelligence coups in modern history. Daniel F. Cameron, a young, idealistic American spy for CIA, lands in Surabaya in the 1960s, when the USSR, Communist China, and the US are vying for strategic influence in Indonesia. He soon teams up with Wim Vermeulen, a formidable maverick and former member of the WWII Dutch Resistance, who becomes the source of highly classified Soviet information. Their dangerous mission unfolds against a backdrop of seething turmoil, intrigue and betrayal that leads to the downfall of Sukarno and the bloody destruction of the six million-member Communist party. In Red Weather is the riveting espionage memoir of our time.