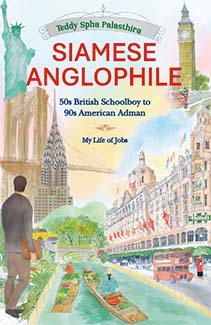 Siamese Anglophile is about the lifetime work of a Siamese born in London and nicknamed ‘Teddy’ by his English nanny. It is a heart-warming story of his eclectic and amusing experiences starting in 50s Britain and ending in 90s America. The Anglo-Saxon world is seen through the lens of an English speaking polyglot, with idiosyncratic insights and historical observations through a series of jobs from fruit-picking in Essex to performing as an extra in James Bond films at Pinewood studios to learning the ropes of the advertising industry in boomtown Manhattan. Here is a nostalgic memoir that starts more than half a century ago and conjures up the optimistic outlook of life at that time. Teddy’s journey from London mailman to adman in Manhattan is amusingly told, with a wealth of fascinating anecdotes and historical references along the way, on working in post-war and sixties Britain, on the advertising business in the days before the Internet, and finally on teaching and travelling in America in the nineties. Teddy combines nostalgia and contemporary insights into the world of yesteryear peppered with wryly humorous narratives.

“Teddy’s sharp memory and eye for detail bring to life the social mores, language, ephemera, and style of times gone by. Sprinkled with historical asides and humorous anecdotes, Siamese Anglophile is a nostalgic portal to the past and an engaging chronicle of a life lived between East and West.”

“Over decades of improbable jobs and vivid experiences in Europe, Asia and America, Teddy Spha Palasthira recounts the quirks of western society and its shifting values with wit, compassion and eloquence. Part memoir, part reflection on the nature of work and an Anglo-Thai view, he takes us inside film sets, ad agency boardrooms, an American university and even a British Post Office to offer fascinating and sometimes hilarious insights into the changing world of work and human nature.”