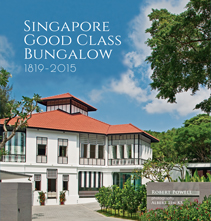 Singapore Good Class Bungalow traces the development of stand-alone residential architecture in Singapore from its early days as a colony to the present. Expertly researched by noted academic and author Robert Powell, it is also a partial history of the architectural profession in Singapore, mentioning many of its eminent practitioners and their works. Alongside the iconic Singapore Shophouse and the ‘Black and White’ house, Singapore Good Class Bungalow brings the history of the island’s detached residential architecture up to date. A detailed introduction is followed by a study of the evolution of the bungalow — from early plantation residences, through the late Victorian and Edwardian styles, Arts and Crafts and Art Deco inspired bungalows to post-Independence residences. The latter includes a history of how the Good Class Bungalow emerged through a planning and preservation initiative into a triumph for the architectural profession in Singapore. Featured in this ambitious book are singular examples of Modern Tropical Bungalow design together with sympathetic and expert restoration projects, linking architectural heritage with modern best practice. Singapore Good Class Bungalow showcases over 100 bungalows, mostly extant, and contains references to all the major phases of construction in the city-state. Beautifully photographed by award-winning photographer, Albert Lim KS, this is a welcome addition to the historical literature on Modern Singapore.

The Author
Robert Powell is Professor of Architecture at Taylor’s University, Selangor, Malaysia. He was previously Associate Professor of Architecture at the National University of Singapore. He is the author/editor of more than 30 books, principally on architecture in Southeast Asia. His publications include Living Legacy (1994), Singapore: The Architecture of a Global City (2000), The New Malaysian House (2008), Singapore Houses (2009), Contemporary Houses in the Philippines (2014) and The New Sri Lankan House (2015). Powell is widely credited with, from the early 1990s, bringing contemporary Southeast Asian architecture to the attention of a global audience.

The Photographer
Albert Lim KS is an acclaimed Singapore-based photographer whose images have been published extensively in ‘Architectural Review’, ‘Singapore Architect’ and ‘Monument Australia’. His photographs have illustrated numerous books including SCDA Architects II: The Architecture of Soo Chan (2013), BEDMaR & Shi: 5 IN FIVE (2011), BEDMaR & SHi: The Bali Villas (2013), Kerry Hill: Crafting Modernism (2014), The Modern Thai House (2012) and Contemporary Houses in the Philippines (2014).