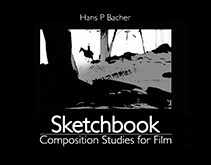 Featuring hundreds of carefully hand crafted illustrations by the internationally renown production designer Hans Bacher, Sketchbook – Composition Studies for Film is a unique journey through the mind and creative process of one of the artistic legends in animation film design. Having shaped such films as The Lion King, Mulan and Beauty and the Beast to name a few, Hans’s work is a part of the very cultural fabric of our age. Here the artist puts on display the rarely discussed first part of image making for film, the conceptual thumbnail. Exquisitely beautiful in themselves, these small illustrations represent the birth of what eventually becomes the iconic images we experience on the silver screen.
Essential to anyone interested in understanding the skeletal structure that exists underneath stunning imagery in all forms of media, this book is especially relevant today with the dramatic increase of interest in film and game design. Although students today have ready access to and an understanding of technical aspects of the craft using associated software, the area most lacking in accessible information is this quintessential first part of thumb-nailing an image. This unique book will provide the student and professional with the fundamentals of conceptualizing images, and how these can be used in composition in the related fields of illustration, graphic novels, 2D animation, 3D animation, photography and cinematography.

The Author
In his 40th year in the industry, production designer Hans Bacher is acknowledged as one of the legends in animation film design. His work with Walt Disney Feature Animation, Richard Williams, and Steven Spielberg’s Amblimation saw him creating the production design for such historic films as Who Framed Roger Rabbit, Beauty and the Beast, Aladdin, The Lion King, Balto, Hercules, Fantasia 2000, Little Match Girl, Brother Bear, Lilo and Stitch and Mulan amongst several others. He is a member of the Academy of Motion Picture Arts and Sciences and has been honored with the Golden Camera Award and an Annie for outstanding individual achievement in Production Design. His first book, Dreamworlds – Production Design for Animation, published by Focal Press, Oxford is considered the best textbook for this subject worldwide. He lives now in Singapore were he passes his knowledge to the students of the prestigious Nanyang Technological University as well as students all over Asia and Europe on his many lecture events.