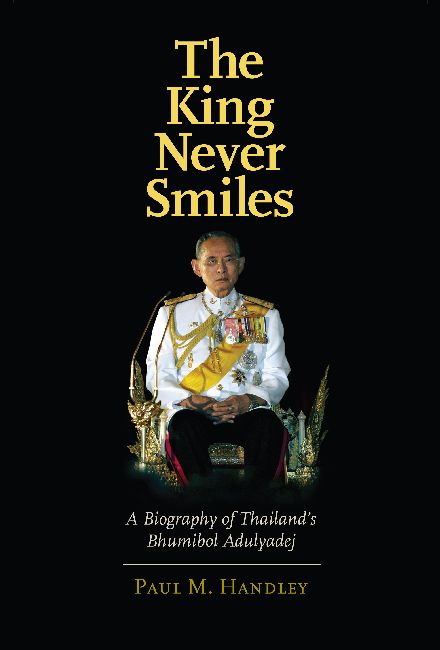 Thailand’s Bhumibol Adulyadej, the only king ever born in the United States, came to the throne of his country in 1946 and is now the world’s longest-serving monarch. The King Never Smiles, the first independent biography of Thailand’s monarch, tells the unexpected story of Bhumibol’s life and sixty-year rule—how a Western-raised boy came to be seen by his people as a living Buddha, and how a king widely seen as beneficent and apolitical could in fact be so deeply political and autocratic.

Paul Handley provides an extensively researched, factual account of the king’s youth and personal development, ascent to the throne, skillful political maneuverings, and attempt to shape Thailand as a Buddhist kingdom. Handley takes full note of Bhumibol’s achievements in art, in sports and jazz, and he credits the king’s lifelong dedication to rural development and the livelihoods of his poorest subjects. But, looking beyond the widely accepted image of the king as egalitarian and virtuous, Handley portrays an anti-democratic monarch who, together with allies in big business and the corrupt Thai military, has protected a centuries-old, barely modified feudal dynasty.

When at nineteen Bhumibol assumed the throne, the Thai monarchy had been stripped of power and prestige. Over the ensuing decades, Bhumibol became the paramount political actor in the kingdom, silencing critics while winning the hearts and minds of his people. The book details this process and depicts Thailand’s unique constitutional monarch—his life, his thinking, and his ruling philosophy.