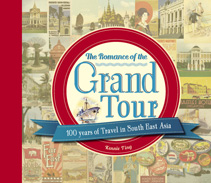 Retracing the steps of the grand tourists from the turn of the 20th century, this book captures the living heritage of 12 exotic locations. Each chapter focuses on a different port of call — from Rangoon (Yangon) to Hong Kong, through the former Straits Settlements of Penang, Malacca and Singapore and the old Dutch East Indies cities of Batavia (Jakarta) and Surabaya, via Bangkok to former Indochina at Phnom Penh, Saigon (Ho Chi Minh City) and Hanoi, through Manila, before disembarking at that most exotic of oriental locales — the Peninsula hotel in Hong Kong. Drawing on archival images and accounts as well as present-day photographs and illustrations, the book captures the romance and excitement of these early tourists as they “discovered” new lands, traditions and peoples “Out East”. In addition, this unique book presents contemporary scenes and experiences for those 21st-century tourists determined to seek out the legacy of a bygone era. Each destination also includes coverage of a grand hotel — extant, preserved and still luxurious — that serves as a base and/or temporary home for today’s traveller.

The Author
Kennie Ting is a sociologist and cultural heritage professional fascinated by the urban histories and architectural heritage of colonial cities in Asia; and by the phenomenon of travel. He graduated with a double major in English and Economics at the University of California, Berkeley and a Master’s in World Cities and Urban Life at Goldsmiths College, University of London. Born in Singapore, he counts six different cities across the world as home, and travels obsessively. When not wandering through Asia searching for traces of the colonial past, he works for the National Heritage Board of Singapore, devising strategies for the promotion and preservation of cultural heritage in the island republic.

Click on the link http://romanceofthegrandtour.com for more exciting information on the journey, or get the book from your nearest bookstore.