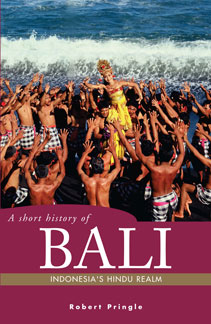 Two million tourists visit Bali every year. Many want to know about the island, its often turbulent past, and the forces that have shaped its universally appealing culture. This lively and informative concise history is for them, and for others interested in a unique but important province of Indonesia.

A Short History of Bali covers the entire history of this intriguing and mysterious island, from before the Bronze Age to the presidency of Megawati Sukarnoputri and the tragedy of the Kuta bombings on 12 October 2002. It looks at the arrival of Indian culture, early European contact, the role of anthropologists and tastemakers of the 1930s in romanticising the island, and the complex legacies of Dutch control. It tells of the Japanese Occupation, the Indonesian Revolution, the massacres of 1965 – 66, and the onset of mass tourism under the Soeharto regime. Finally, it looks at recent economic progress, as well as its flip side — environmental problems generated by population growth and massive tourist development. It also draws on Balinese opinion about the meaning of the island’s past and its future in the new Indonesian democracy.

A Short History of Bali is an important insight into the complicated and surprising history of one of Asia’s most captivating societies.

Robert Pringle is an historian, journalist and diplomat with special interest in environmental issues, ethnic minorities and conflict resolution. He spent thirty years in the United States Foreign Service, nine of them in Indonesia, the Philippines and Papua New Guinea. He has a doctorate in Southeast Asian History from Cornell University and lives in Alexandria, Virginia, USA.