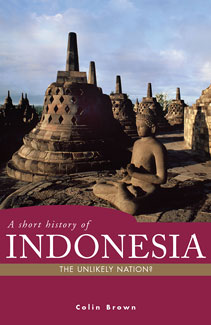 Indonesia is an enigma to outside observers, who have never seemed sure just what it is: Islamic, authoritarian, democratic, developing, disintegrating. The largest country in its region, Indonesia holds the key to Southeast Asia’s future, while recent developments—demands for greater regional autonomy, ethnic, political and religious conflict—are making the archipelago significant on the world stage and prompting re-examination of its history.

As a state Indonesia is a twentieth-century creation, but its peoples’ roots go much deeper. Through the exchange of ideas, myths, rulers, religions and trade goods, they share a history two millennia long. Occupying a key section of the east Asia-Europe trade route, the archipelago was influenced by external forces, including the religion of Islam and Dutch colonialism. Today, Indonesia has the largest Muslim population in the world. How were these societies brought into interaction with each other, eventually to produce the single state of modern Indonesia? And how have the peoples of independent Indonesia tried to resolve the consequences of that unity since?

Colin Brown addresses these questions, bringing the latest academic research to bear on this readable, comprehensive short history—from the earliest recorded history through the classical empires, colonialism and Japanese occupation, Sukarno and Suharto and the 1999 elections, to present-day tensions and beyond. This is an important book for anyone wanting to understand how Indonesia came to be, and what its future holds.