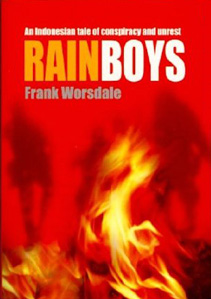 Corruption and greed brings Indonesia to its knees and East Timor is devastated by the ‘forces of darkness’ to prevent its independence. Three expatriate engineers out in Java to build a bridge are caught up in this chaos.

Through the eyes of these expat’s, Liz Duncan a Scott, Matti Talvi a Finn and Tom O’Connell an Irishman, their lovers and friends, we witness the persecution of Indonesia’s ethnic Chinese, the horror of the fire-bombing of Jakarta, the plight of refugees in the razor-wired compounds of East Timor and a host of atrocities suffered in the struggle for Indonesia’s democracy and East Timor’s independence.

Not all three expat’s survive this trauma – nor do all of their friends and lovers. But those who come through are there to celebrate when Indonesia at last gains its democracy and East Timor its independence.