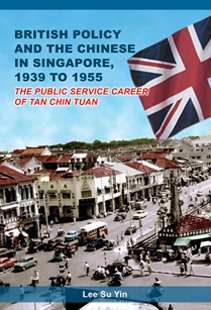 British Policy and the Chinese in Singapore, 1939 to 1955 examines the policies and methods employed by the British in their administration of the colony of Singapore during a period when dramatic changes were happening there. The transformations were brought about by events which included a worldwide economic depression, the Second World War, a tumultuous postwar recovery and the birth of a Chinese Communist nation. The Chinese constituted the most populous ethnic group on the island. Before the war, Chinese, who were members of the British empire because they were locally-born, were a minority. To bring both the local-born and China-born Chinese within the pale of British administration and jurisdiction, the authorities relied on intermediaries, that is, men who acted as the channel of communication between the British and the Chinese.

This new book, therefore, approaches the topic by focussing on the public service career of Tan Chin Tuan, the highest-ranking non-European government official and spokesman for Chinese economic interests in the Legislative Council until 1955. It is not intended to be a biography of Tan. Instead, the first objective is to analyse the ways in which the colonial authorities tried to maintain law and order in a colony dominated by a migrant population during a period of major political transformations. The second aim is to document and examine the dimensions of Tan’s public service career before the colony was granted a measure of self-government in 1955. Through this, a valuable case study is developed of how British colonial power made use of Chinese community leaders to liaise with and promote its rule over the community.