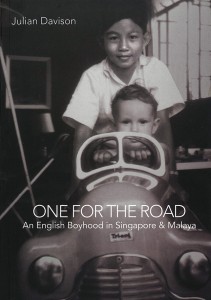 One For The Road, Julian Davison’s beautifully written collection of stories about Singapore and Malaya in the 1950s and sixties, was a best-seller when it first appeared in 2001.

This new, revised edition, with additional material from his second book of reminiscences, An Eastern Port, effectively constitutes a biography of childhood on the eve of independence and the years immediately following. With his distinctive and entertaining mix of local colour, quirky historical detail, and personal recollections, this compilation of stories from the inimitable Dr. Davison. A literary complement to his popular Site and Sound TV series is guaranteed to enthral, move and amuse readers in equal measures.

A fascinating collage of childhood memories of times past in Singapore and Malaysia?the charm of this book stems from the intensity of experiences recounted from everyday life in our region, long before the age of air-conditioning and the Internet.

The Author
Julian Davison (b. 1956) is the son of an architect. He grew up in Singapore and Malaysia and at the age of nine he was sent to school in England, though his family home continued to be in Kuala Lumpur until his father retired in 1979. He has a Bachelor of Arts degree in anthropology from the University of Durham and he subsequently studied at the School of Oriental and African Studies in London, where he completed a doctorate in 1988 based on a study of the headhunting rituals and associated oral literature of the Iban of Sarawak.

Davison currently resides in Singapore where he is a freelance writer,editor, illustrator and book designer. He has edited or otherwise contributed to several reference books and scholarly works relating to the region and he is also the author of regular feature articles on regional history and related subjects for local magazines.

Davison is also a professional watercolourist, specialising in architectural illustrations and renderings, many of which have appeared in publications relating to the architecture of the region. He is also the host of Arts Central’s popular TV history series, “Site and Sound”.