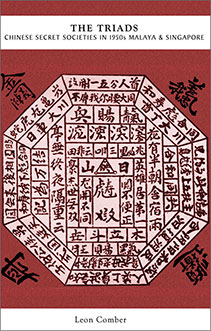 This volume collects together and reprints two groundbreaking publications from the 1950s by Dr Leon Comber: Introduction to Secret Societies; and Traditional Mysteries of Chinese Secret Societies in Malaya. The volumes were written to initiate laypersons to the mysterious world of Chinese secret societies. Secret societies were originally founded on the bedrock of blood ties, kinship, mutual help and rebellion against repressive regimes and especially relevant to the immigrant communities of the Nanyang (overseas) Chinese as they integrated into new homelands. To that extent, many of their rituals, codes of conduct and history held true to original ideals. Over time however, many secret societies later turned to crime and have become synonymous with criminal organizations serving their leaders and gang members purposes rather than the wider community. Now republished in one paperback volume with new setting and design, The Triads provides a new readership with a fascinating glimpse into a world which continues to capture the imagination for both older and younger generations of students of an overseas Chinese community in Asia.

Key selling points of book:
– Fully illustrated with original images by the author.
– Illustrates the historical development of secret societies in an overseas Chinese community .
– Written by an expert who himself battled against these secret societies.
– Only introductory account of its kind.
– Will appeal to historians archivists and students of Southeast Asian history and culture.

The Author
Leon F Comber born in London, worked for many years in the Special Branch of the Malayan Police from 1945 and including the Malayan Emergency. A renowned publisher, editor and author he is currently Research Fellow (Adjunct), Monash Asia Institute, Monash University, Melbourne specialising in Asian studies ranging from history, security intelligence, political science, languages, literature, and publishing.